Flight of the Owls... 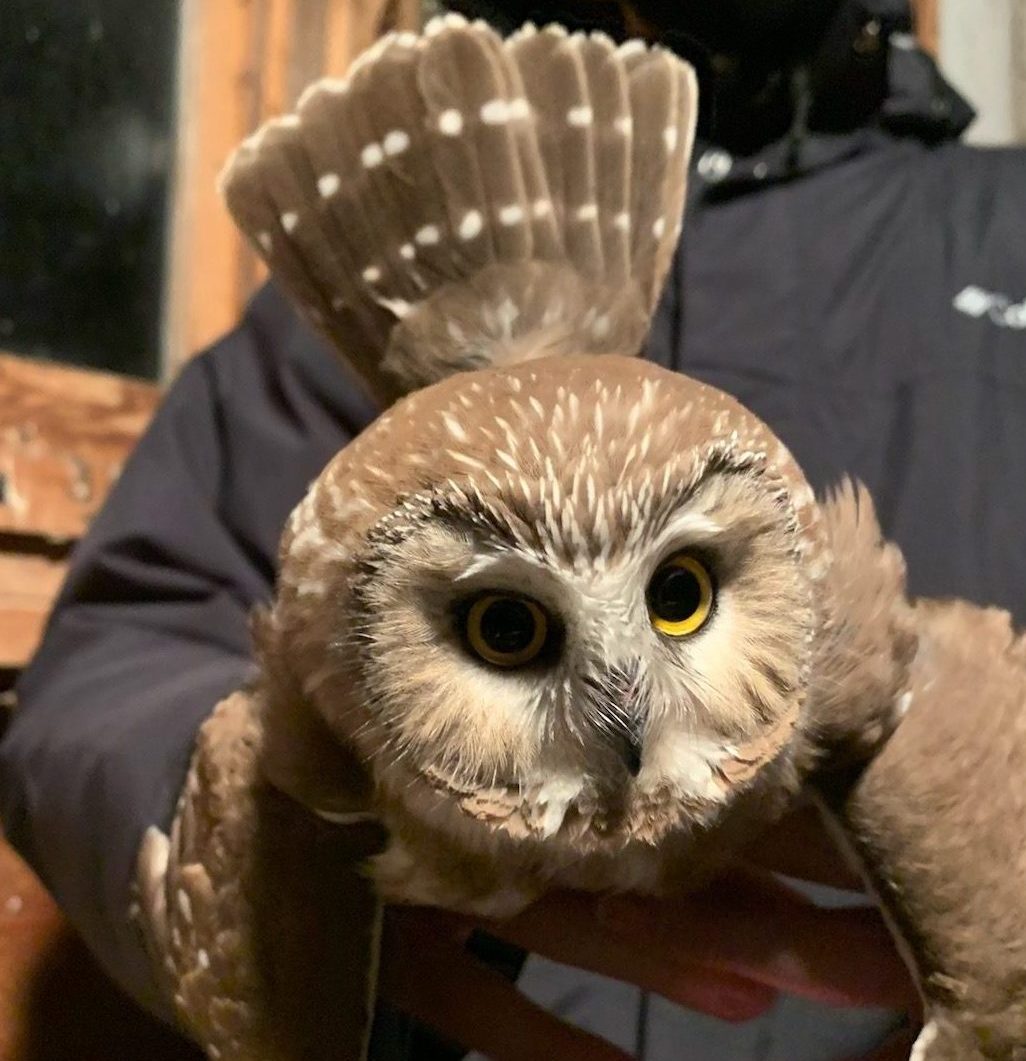 This past fall, in spite of the pandemic and all of its associated protocols, we did run the northern saw-whet owl banding station for the twentieth year in Hopkins Forest.  It was a little quieter out at the station — we weren’t able to host Williams and MCLA classes or visitors from the public as in the past — but the owls didn’t seem to mind.  In fact, based on our banding results (207 individuals caught in 32 evenings of banding), we had a strong flight this year.  A corresponding bump in captures was recorded at some other banding stations in eastern North America as well, though not all of our fellow banders experienced such a robust flight.

To understand what’s happening with the owls, let’s take a closer look at the numbers.  Out of the 207 (our third most ever) Northern saw-whets captured at HMF, an impressive 63 percent were hatch-year birds, with only 37 percent being adults.  The sex ratio was a little more typical for our station: eight percent male, 78 percent female and 14 percent unknown.  With saw-whets, sex is determined using size and weight: females tend to be larger than males. However there is a zone of overlap in size, so that sex cannot be ascertained in all cases using this technique — this warrants the category, ‘unknown.’ 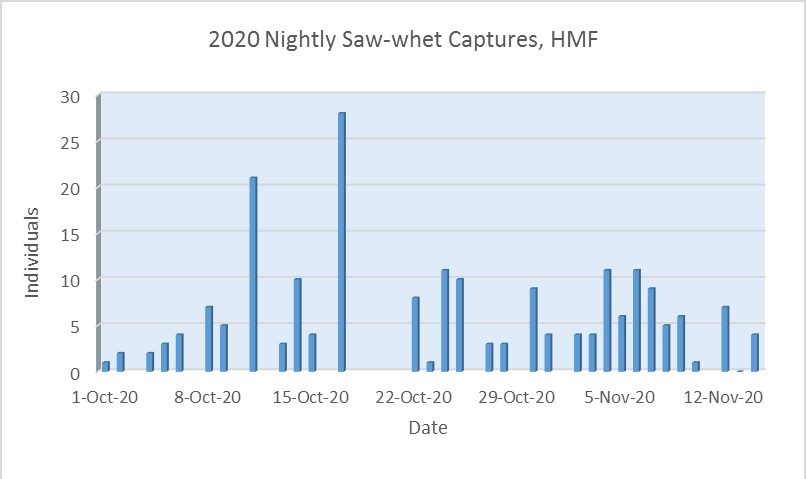 The proportion of owls that return to the nets is also insightful.  This year only 4 individuals (two percent) were captured a second or third time during the season (local recaptures).  Additionally, only 7 birds or 3.4 percent of our captures arrived having been previously banded at other stations (foreign recaptures).

These trends – high overall captures, a high juvenile to adult ratio, and low rates of foreign and local recaptures — all point to a population surge or ‘irruption’.  If we assume a constant overall banding effort from year-to-year, a small proportion of previously tagged owls (3.4 percent) would suggest that the entire population had increased.  Strong flight or irruption years also tend to be typified by high ratios of first year birds.  This makes sense when you consider that saw-whet owls are a short lived species in the wild; the rigors of life on the wing for a small, northern raptor are just too extreme to favor longevity.  Apparently, good conditions on the breeding grounds last summer resulted in a “baby boom” of owls up north and (because populations are typically skewed toward juveniles) an unusually large overall movement south during the fall.

With such a robust population moving toward their wintering grounds, it was not surprising that the owls were in a hurry; indeed, our very low local recapture rate suggests that they were not hanging around Hopkins Forest for long.  This points to intense competition for food (and perhaps roosting cover) among these birds.  Being small, their prey options in the fall are limited (basically mice and other very small mammals) and with a swelling overall population, there was strong pressure to keep moving south in search of more fruitful foraging opportunities and lower densities of fellow owls.  Of course, prey supply and scarcity could also drive competition and the urgency to move on.

Even within such an expansive network of banding stations (about 100) in the U.S. and Canada, the transient and wide-ranging nature of this species makes it hard to draw definitive conclusions about its populations dynamics.  That’s why we need to keep at it – year after year – to catch and band these little owls in order to amass more information on their secretive habits.  We invite you to join us at the station this fall if conditions permit.