Spring: Seasons of the Forest Series

Seasons of the Forest: As I complete my trek through the winter season at Hopkins Memorial Forest, I have the unique opportunity to reflect on each season this year in the forest, due to the fact I have worked each one in this last year. Over the course of four blog posts, I’ll document how the forest shifts and develops as each season pass in the eyes of a student caretaker.

The forest melts in spring. And then it freezes. And remelts. And refreezes. It is a constantly shifting, sometimes freezing, and often muddy place. It is impossible to dress for – either too cold, or so warm you have to shed layers. The forest itself seems to shed layers. Layers of ice slide off trees, snow slips off buildings, water soaks into soil and streams, which gush, newly hydrated. Later, new growth will slowly creep onto branches and bushes, a dusting of green. Flowers in Buxton garden will begin to unfurl, weeds sprout and wheedle themselves between the other plants. Salamanders will thaw, ready to bask in the sun of summer. Birds will begin to sing with a fierce intensity. 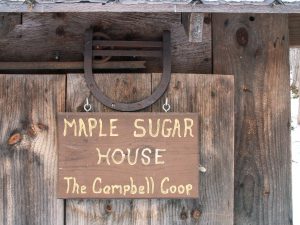 For caretakers, spring, is devoted entirely to two tasks: maple sugaring and spring cleaning. In the weeks following after the first thaw, maple sugaring and spring, itself, are kicked off. The first thaw is a key moment for maple sugaring because it is when the sap begins to run, dripping and gushing out of tapped trees. The trees fill buckets and we collect them, pouring their contents into a large circular vat. We take it to the maple sugar house and pump – literally pump – into our evaporator, which is the wood-stove powered machine that heats and thickens the sap into syrup. It takes 40 gallons of sap to make one gallon of syrup, so there are a lot of sap to be transported and boiled. And our temperature fluxates constantly, as we duck in and out of the smoky sugaring house. It is actually one of my favorite times in the forest, though. Not only does the constant bucket carrying mean that my arms get very toned, but I can say for a fact that nothing is more satisfying that discovering that a tree has filled its bucket to the brim and nothing more delicious than fresh made syrup right out of the evaporator. Plus, our clothes and hair smelt like sugar after spending hours in the smoky maple sugar house.

The late spring, on the other hand, is devoted entirely to cleaning and general maintenance. Last year, our energies were devoted entirely to cleaning the evaporator. Over the course of burning wood and boiling sap, each metal surface of the evaporator – and there are many – are coated in charcoal and burnt sugar, normally dull mental turned midnight black. This was not a task that a little soap and water could solve. It took five weeks of rotating crews scrubbing at it with various tools and objects to get it near to clean. We used wooden rods and steel wool, scrub brushes and rough felt. We sprayed with various intensity from the pressure nozzle on the hose, often getting soaked ourselves and we were often up to our elbows in the greasy, smoky muck. The ordeal was spoken about amongst the student workers. It was posted on caretakers Instagram’s. Different crews shared progress to each other after each shift, as to be prepared for the next phase of cleaning. It created a sense of fierce solidarity and remained discussed, humorously.

I, personally, found myself getting very invested in the task. When I found a new method of effective scrubbing, I demonstrated it to others with excitement. I hear that this is not unfamiliar. When talking to a senior caretaker this winter study, they expressed how their sophomore spring in the forest was spent rebuilding the muddy roads, shifting dirt and gravel to account for the ways that the melting and refreezing distorted the landscape. We were doing a similar task that afternoon and they spoke with careful expertise to the rest of the group, instructing us on the best dirt to place where and how to pack it down so cars didn’t sink, and recounted stories of a couple springs before with a jokey nostalgia. It was, essentially, moving dirt from one place to another, but the caretaker took pride in it. Spring in the forest is hard work – it often doesn’t allow for adventuring in the forest like in summer or the meditative work of splitting and hauling wood in fall, but it does, I think lead to the most collaboration and bonding between student workers and I am looking forward to it heading to us quickly!

President Maud S. Mandel has announced plans for the fall 2020 semester. More details here. Please note that all Williams College buildings are closed to the public until further notice.